I thought I would let you into my mind, so you can see how I think of marketing.

The way I strategize to grow my own company.

And what you’ll read next will probably come as a shock, as I don’t really view marketing in the same traditional way you read online.

Now before I dive in, let me give you a little bit of context.

My company is NP Digital. It’s a digital marketing agency where we help companies of all sizes grow.

That’s where I focus my marketing efforts… to grow NP Digital.

Digital marketing will only take you so far

Even though I am a marketer, I don’t believe marketing alone builds a massive company or brand.

Just think of it this way, the number of people that search for the term “shoes” is roughly 1,220,000 per month just in the United States.

But Nike, sells more shoes than that in the U.S. each year and they aren’t the only shoe company around.

Globally they sell 780 million pairs of shoes each year.

How could that be?

People don’t always “search” for what they are looking for.

When I buy shoes I typically just go directly to Nike because I am familiar with their brand and their products. I don’t think I have ever Googled for shoes.

The same goes with ads, yes, I have been shown ads for shoes on Facebook and Google, but it’s never led me to purchase a shoe.

Now that doesn’t mean marketing or SEO doesn’t work. All of that helps you build a brand, which is what causes the majority of purchases.

Here’s an interesting stat that you may not know… 59% of people prefer buying products from brands they are familiar with.

That’s why there are so many more shoe sales in the world than searches. It’s estimated that there are 14.5 to 19 billion shoes purchased each year, but yet the online searches don’t even make up 1/20th of that number.

And when you look at Nike’s brand, they generate more searches on a monthly basis than people just typing in the word “shoes”.

That’s the power of building a brand.

Because you are here, you are probably somewhere familiar with marketing and you may even be an expert on it.

But let me ask you this question… have you heard of the following brands?

Those are all ad agencies that have thousands of employees. But yet most of us, even though we are familiar with marketing have never heard of them.

And it doesn’t mean they don’t have a small brand, they more so have a large brand within a very specific audience segment.

And that audience is their ideal cliental”. If you are a large company that can spend $25,000,000 or more on marketing each year, you probably are familiar with those companies.

Now if your product or service targets everyone, kind of like Nike does, then of course you’ll want to build something everyone knows.

What you’ll also find is your brand will naturally grow over time.

Even though you probably haven’t heard of the ad agencies above, their brands have grown to be large by just being in business for enough years.

Sure Nike spends over 3 billion dollars on ads, but what really helps is that they have been around since 1964.

I thought it would be fun to share with you some numbers on the power of time.

As I mentioned above, I am focused on growing my company NP Digital. It’s currently on its 4th year in business.

That’s not a long time in the grand scheme of things, but it is something.

But here is what’s cool when we first started out in year 1 all of our business was generated through SEO, content marketing and social media marketing.

Those were the channels we leveraged to generate sales.

Fast forward to today, we still leverage those channels, but now 27% of our sales are generated through word of mouth, referrals and brand recognition.

It’s not the biggest percentage, but just imagine what happens when you are in business for 20 years or even just 10. It’s a massive compounding effect, assuming you provide a good product or service.

So, if you really want to grow your revenue you just have to be patient and keep doing good work and of course do good marketing as that is what will kick start the natural growth.

So, what’s your plan Neil?

I already spend a lot of my time on marketing, but I am doubling down in ways you probably won’t have guessed.

Those marketing tactics are just the standard ones that we all know about and use. I am now starting to go after channels that we take for granted…

I’ll add more to the mix as we grow. For now, just adding the 4 new channels to the mix above is already a lot of work.

And compared to the digital channels I started with, I bet the new additions won’t have as high of a conversion rate or even return on investment.

But that’s alright. The goal is to build a big business and sometimes you have to invest even when no ROI can be made because you know in the long run building a brand with your ideal audience will pay off.

Most marketers that I know of focus on ROI. For every dollar they spend they want to make 2 or even 3.

I look at things differently. I focus on building a brand and a reputation. Even if it doesn’t produce an ROI directly, I believe it can help you become a leader within your industry.

And if you can become a leader, eventually the numbers will work out, but of course it is a gamble.

It’s the same reason I got into blogging back in 2005 when others weren’t willing to. I believed that if you educated and helped others out, eventually it would pay off. But for the first 8 years I was in the hole and couldn’t show a return.

Now the real question is, are you willing to play the long game and invest where others aren’t willing to? 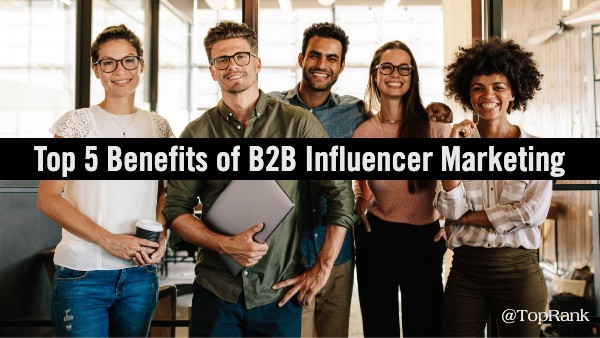 Despite that 96% of marketers engaging influencers for marketing deem their programs successful, there are still a very large number of B2B companies evaluating where influencer engagement fits in their marketing mix.

Before I get to the list, I think it’s important to mention that benefits realized are directly connected to goals imagined. That may seem obvious but the application of influence to marketing is viewed in many different ways and therefore, the outcomes can be just as different.

For example, a pilot is often meant to be a proof of concept and sparks connections with influencers.

An integrated influencer content marketing campaign that runs over several months and across channels produces a lot of useful content and helps identify which influencers are effective.

An Always-On approach over time develops a rich source of content and relationships with influencers which can accelerate the quality and promotion of the content by influencers as well as organic advocacy.

So the benefits B2B brands can realize from incorporating influence into their marketing mix really depends on the approach. Here’s a list of 5 of the most common and impactful benefits of working with external and internal influencers at B2B companies:

Properly identifying the topics that matter to customers that the brand needs to be more influential about leads to finding people who already have the desired influence. Collaborating with experts that are respected authorities on the topics of influence produces content, communications and often advocacy that is believable, is empathetic to the concerns and goals of real customers and is trusted by the audience the brand is trying to reach.

Connecting external influencers with internal executives to collaborate on content, video conversations, virtual events and similar exchanges of ideas can validate key leadership messages of the brand. Whether it’s running a webinar discussing the findings of the brand’s most recent research or whitepaper to conducting a series of livestream video or podcast interviews between key executives and external influencers, connecting trusted industry voices with brand messaging can drive credibility, differentiation and leadership.

According to research in the State of B2B Influencer Marketing Report, 74% of B2B marketers believe that collaborating on content with influencers helps improve the experience for prospects and customers.

An increasing number of professional influencers in the B2B world bring both expertise as well as media creation savvy. That means the ability to produce video content, podcast content or graphical and text content that is in tune with customer expectations for more experiential content that the brand might not have the resources to produce.

Alternatively, even if the B2B brand has the resources to create great video, audio, graphical and text content, adding influencer contributions “optimizes” for credibility and authenticity, which is a better experience than brand content simply pontificating its importance.

When effectively designed and planned, an influencer engagement effort can create a community of influence that the brand can tap for a variety of content creation efforts. Imagine having a group of 10, 25 or as in the case of LinkedIn or Adobe, 60-75 industry experts on-tap to engage on content projects?

The reputation influencers develop on the topics of influence means trust when it matters most – making decisions about which B2B solutions to consider, evaluate and purchase.

There is a compelling connection between the topics and keywords that people search on when looking for solutions and the topics around which industry experts are influential.

Optimizing content with keywords is at the core of improving the findability of brand content on search engines. Including influencers on those same topics in the content is a way of optimizing for credibility. What good is being found in search if people don’t trust what they find?

Going a bit deeper into the influence and SEO connection, marketers could consider whether the influencers they are working with are recognized as entities within Google search results. When those same influencers contribute to content published by the brand, their identity imparts credibility and relevance for search.

Another consideration is to evaluate the SEO effectiveness of where influencers publish – their own blog, contributed articles or columns with industry publications and elsewhere online. What is the Domain Authority of where the influencer publishes and do the links they include in their content carry weight? Does the influencer’s content “rank” on search engines for the topics the brand wants to be more influential about? Is the influencer creating the kind of content that ranks? Video, audio, images, text, scholarly articles, books, etc.

The SEO value of working with an influencer is not universally true across topics, but with some due diligence and research, some very valuable opportunities could be uncovered and relationships built to help brand content become findable and credible at the very moment customers are looking.

Of course this is not a comprehensive list of benefits for B2B brand to work with influencers, but it is a compelling list. While many B2B marketers may skim the surface of what’s possible from working with influencers, those who can look a little deeper can find tremendous upside and value that not only accelerates the impact and effectiveness of marketing for short term campaigns, but for longer term brand and thought leadership perception in the industry.

The majority of American households now include pets, and recent global quarantines have only brought us closer to them. In today’s blog, Miriam outlines eight ways you can honor the relationships your customers have with their animals, plus tips for weaving those efforts into your local business marketing strategy. Generate Ebooks on demand without typing any words!